It seems to be popular to share what gear you use. I'm pretty picky about some things, so I thought I would take a stab at it. Note that I'm just going to address physical hardware in this post, I'll save software for another post. 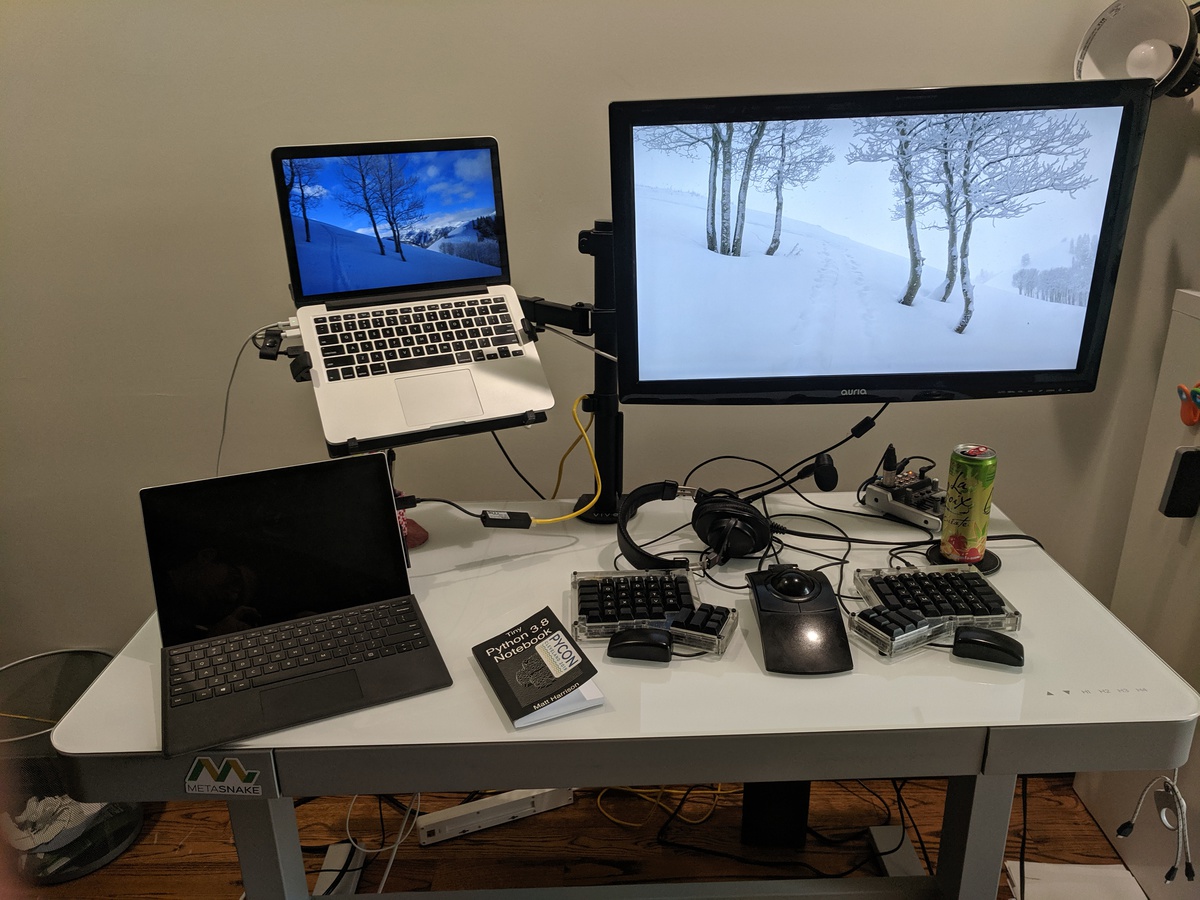 I used Linux exclusively for over 15 years on ThinkPads, but due to the nature of my training and consulting got a Macbook in 2015. It is a decent piece of hardware. The screen went out on me a few years back, and now it seems the keyboard and trackpad are flaky sometimes. A few reboots seem to do the trick. Unless I'm training, I use an external keyboard and mouse, which oddly enough work even when the built-in devices do not. Feb 2020 Update - I have replaced the cable for the trackpad which seems to have solved the problem. Annoying, but easy if you have the correct tools and spend five minutes watching Youtube.

At the time it came out, the screen DPI was a wonder. Now it is a little more commonplace. I do most of my work on this machine. Again I will discuss software later. As of 2019, the 16inch version of this machine has reverted to using the same keyboard as I have. The butterfly keyboards of 2017-2019 were notoriously flaky, and I stayed away from those machines.

The battery life is still decent on this. I take it with me when traveling, and it performs well. I like the aluminum body, which is unparalleled among laptop manufacturers. I wish I could upgrade the SSD and RAM like I could with my ThinkPads. Se la vie.

My next laptop will probably be an Apple due to video editing software.

At some point, I realized that the vast majority of the world (and developers in said world) use Windows. I always missed my UNIX environment when forced to use Windows at work (in the NT days). Windows 10 is useable, and this device also travels with me (as both a backup and if I need to demo something on Windows).

The device comes in handy as a tablet as well. I've used the stylus and found it to be nice when editing books. I was a technical reviewer for Hands-On Unsupervised Learning Using Python and I liked being able to write on top of PDF's with the stylus.

Another area where the Mac excels is the trackpad. It is far superior to the MS version. However, I much prefer the ThinkPad's TrackPoint to either. I know ... gasp, the terror!

I started standing at work around 2011. My job at the time was pre-standing desk movement. So I needed to use an adapter on top of my sitting desk. I used an Ergo Desktop Kangaroo Pro This worked ok. It was maybe not quite as stable but was able to transform from sitting to a standing position without falling over.

I mostly work from my home office these days and use a Tresanti Desk. I purchased mine at Costco, and I have few regrets. I'm 6'4", and the top hieght works for me. It has a glass top which my kids have used to write notes to me with whiteboard markers.

There are 3 USB outlets at the side, and no this is not a MIDI device, they are only used for charging. On that note, I have an IKEA Signum "Cable management" drilled into the bottom of the backside of the table. In the Signum is an Anker Dual Display Universal Docking Station. As you can tell from the photo, I'm not particularly concerned with eliminating wires. But it would be nice to have USB hub functionality in the desk.

Because it has a glass top mounting stands to it can prove challenging. My monitor stand works with it, but only because I could disassemble the clamp for it.

My other issue with this desk is the size. When I'm running a remote training and using the Mac and Windows, it can get a little crowded. I also use physical notes, so almost every bit of space is used.

I'm a huge fan of taking breaks during the day. Not only do they help your body; they help you with productivity. I recommend getting a standing desk. Do you have to stand eight hours a day? No. I used to stand most of the day. These days I sit most of the day because that feels better for my body. But I will still mix it up. I think the key is to be aware of your body and posture and take care of it.

Another thing I recommend if you are going the standing route is to pick up a padded mat to stand on.

I picked up an ErgoDox keyboard when Drop (the company formerly known as MassDrop) offered them initially. I was using a Unicomp (with a TrackPoint!), but my fingers were telling me that I needed to do something else. Come to think of it, that time probably correlated to when I was writing the first edition of what is now Illustrated Guide to Python 3.

I knew I wanted a keyboard that was ortholinear, mechanical, and split. Bonus points in that the firmware is opensource and you can program it how you want. This keyboard is an acquired taste, but I liked mine so much that when Drop offered them again, I picked up a second (partially out of fear that I would never be able to purchase one again, and partially because I wanted another for home use). Since that time, it appears that the DIY mechanical keyboard group has flourished. You can now purchase completely assembled models, and there are dozens of riffs on split keyboards.

I do not use QWERTY on this keyboard, but rather the Norman layout. Again, this is another acquired taste, but it has worked out for me. Also, I have keys that have a dual purpose. For example, I use emacs a lot. So my left thumb has Control under it. But if I tap it and release, it fires the Escape key.

I typically do not take this keyboard with me when traveling. I took it to PyCon once when it was novel, but it is not really portable (I have a travel case for it) in that it is bulky, and TSA gives you weird looks when you travel with it.

Again, you need to take care of yourself. Your fingers, wrists, and arms can suffer damage from too much use or non-ergonomic use. Take note and do what feels best.

Award for best-named company of 1995 goes to CST.

When I got my ErgoDox, I was considering modding it to add a TrackPoint. In the meantime, my previous blog had a couple of entries on the ErgoDox, and they were popular enough such that I sent Drop enough purchases of ErgoDoxen that they sent me a "Thank You" gift. The CST trackball mouse was in that gift box. It seemed to be the answer I was looking for. And it fits nicely in between the split keyboard.

I have also added additional "buttons" that plug into the mouse. I have them situated so that I can tap them with my palm. The left palm is a command modifier, and the right palm is the spacemacs leader key.

Apparently, the ball is the size of a billiard ball. I'm not a big pool player, but that seems like a fancy mod.

I also have two of these trackballs (one for "work" and one for home). As of 2019, CST seems to have retired and sold the business. Whether these high-quality devices will remain in production by the new owner remains to be seen. They are no longer available on Amazon. eBay lists one at over $400!

Again, listen to your body. If it tells you something when you are mousing about, maybe you should look into a change. A trackball certainly uses different body movements.

I bought an Auria 27 inch external monitor about ten years ago. At the time, it was a high DPI monitor that got good reviews for the price point. I will probably replace it with a 34 inch 4k monitor soon, but it has served me well.

I purchased the Vivo Laptop Monitor Mount in an attempt to get a little more real estate on top of my desk. This is a sturdy product that I enjoy, not in spark joy type of enjoy, but it does the job. It also makes standing more ergonomic as it enables me to raise my screen higher.

I do up to a dozen virtual trainings per month, and this mic has served me well. The Audio-Technica BPHS1 has a long cable which allows me to walk around when teaching and not have to worry about standing in front of a mic. I also have a Blue Yeti, but this mic is more of a set it and forget it type. I feel like I'm always fussing with the levels on the Blue Yeti.

This is an XLR mic, so you will need a mic preamp like the Behringer Xenyx 302USB to use it with a USB interface.

I have a long power outlet attached to the Signum, and I hang the mic off of that when it is not in use.